“Who cares? Gender and humanitarian action”: The University of Geneva and IMRCRC’s latest exhibition

The University of Geneva and the International Red Cross Museum are collaborating in an exposition that is loyal to the museum’s practice while highlighting the issues linked to women’s place in humanitarian work. The exposition held from the 30th of May to the 9th of October is entitled: “Who cares?: Gender and Humanitarian action”. 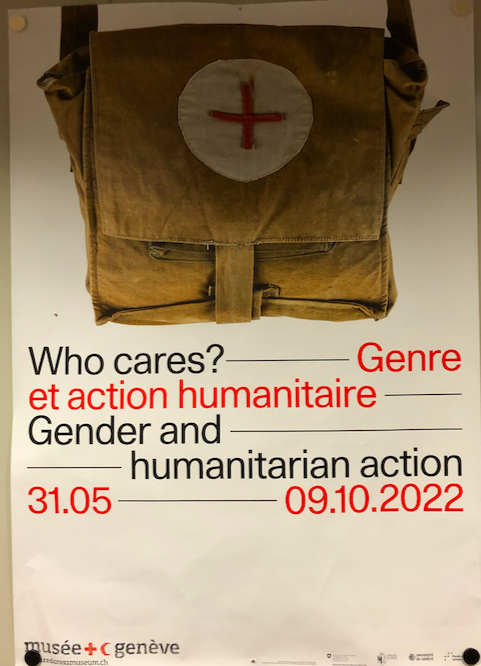 The title is an ingenious play on words meant to question on one hand who cares about victims of conflicts, displacements and natural disasters, but more importantly, who cares for them on a daily basis. This is a direct reference to how in feminist theory, jobs known as being a part of the “care” sector are disproportionately held by women. Sociological teachings insist that this is due to a self-fulfilling prophecy: these jobs are mostly held by women because gender roles and norms have dictated that they are the only ones who can demonstrate qualities such as empathy, generosity and comfort. Through first and secondary socialization, girls are taught that these behaviours are innate within them, thus prompting them to choose these paths in the future. This is also known as the “sexual division of labour”. Third wave feminists such as anthropologists Margaret Mead and Paola Tabet have employed this term to highlight how men and women are systemically, socially valued unequally in the workplace (1).

While the men are physically removed from direct conflict supposedly engaging in vivacious, level-headed and diplomatic debates, women are often depicted in World War memorabilia as caregivers, mothers.

The exposition provides authentic documents to the public, such as twentieth century photographs depicting women’s involvement in the Red Cross, and wartime posters urging women to join the war effort as a part of the International Red Cross to fulfill their duty to their nation (2).

Through a constant contrast between war memorabilia showing women as passive, motherly angels of mercy, in opposition to women acting in the perilous fields of war, the exposition demonstrates how important it is for past and present generations of women to defy gender norms for the sake of the greater good. The audience is able to become familiar with the involvement of less-known women, such as Anne-Marie Grobet (active during the 1980 Angolan civil war), Janine Belkhodja (an Algerian gynecologist and obstetrician active in Tunisia and Algeria in the 1960s), Florence Nightingale, and the too-often forgotten Mary Seacole, both active during the Crimean War.

The importance of this exposition

This exposition highlights the contemporary challenges linked to the interaction between gender and humanitarian action by showing the evolution of such an interaction over the last two centuries. In a challenging time where the climate crisis is worsening, far-right populism is rising, the economic conditions are steadily declining and conflicts are arising globally: this exposition stresses the importance of inclusive humanitarian action.